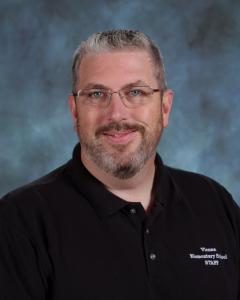 Mr. Carmichael is originally from Pittsburgh, Pennsylvania.  He enjoys spending time with his wife, daughter (29), and son (24).  Outside of school, he also enjoys watching his Steelers, listening to music, being at the beach, walking and traveling.  Mr. Carmichael received his undergraduate degree in Elementary Education from California University of Pennsylvania and his graduate degree in Educational Leadership from George Mason University.  He has been an educator in FCPS for over 25 years.

Mr. Carmichael has spent time as an intern at Hutchison Elementary and Herndon Middle School.  He then went on to teach at Floris Elementary.  During that time, he was a member of the SOL Committee for the State of Virginia developing the Math SOL Assessments.  In 2005, he was promoted to Camelot Elementary and helped support students and staff in both the general and hearing impaired program.  While at Camelot, he served a summer school Principal and developed a robust after school program to support students both academically and social/emotionally.

In 2010, Mr. Carmichael was selected the Assistant Principal at Vienna Elementary School and then made the transition to Principal.  As an instructional leader, he supervised staff, created professional development opportunities, and refined systems of supports which lead to improved students achievement in reading, math, social studies and science.  Over the years, he has mentored other Principals around the county and served on a variety of leadership committees.

Mr. Carmichael believes in and has prioritized providing access and opportunity to all children so they can excel as Valiant Vikings.  He believes this is done by creating a supportive environment built on a foundation of strong relationships where there is a sense of belonging for students, staff and families.